Join us for a great season full of laughs, music, and fun! With the purchase of the season package you will get 6 great shows for one great price and save $20. This is a FLEX Pass, so when you purchase this package you will receive a code to use at check out when you select the dates and seats for each show. If you need assistance please don’t hesitate to call our box office at (607) 321-9630. Your package will include tickets to:

Murder at the Howard Johnson’s (September 16-25)

by Ron Clark and Sam Bobrick

All is fair in love? Even murder? The question posed in a Marx Brothers sorta way is the funny suspense comedy about a love triangle in the Howard Johnson’s Motor Inn. A dentist, his lover and her husband all try to kill each other in comic madness. Check in for BIG LAUGHS with this uproarious comedy!

Over the River and Through the Woods (November 18-27)

Nick Cristano may be living the life of a modern young professional in New York City, but his loving grandparents never let him forget where he belongs: in New Jersey, in the bosom of his tenacious, tender-hearted, loud, loving, and well-fed Italian-American grandparents, who live two doors down from each other in Hoboken, and who lavish all of their affection on their last unmarried grandchild. Faithfully, Nick goes “over the river” to Grandma’s house every week for Sunday dinner. When he is offered an important promotion in Seattle, Washington, Nick threatens to break this routine by a distance of some 2,800 miles! Frank, Aida, Emma, and Nunzio are heartbroken at the prospect of their beloved grandson raising a family all the way across the country—or worse, not raising a family at all! Besides the usual tactics of emotional blackmail, in order to keep him safe at home, these wily elders cook up a matchmaking scheme, inviting lovely nurse Caitlin O’Hare over for Sunday dinner. Will the prospect of true love keep Nick from moving across the country? Over the River and Through the Woods is a warm-hearted, boisterously funny, and touching story about intergenerational relationships, deep familial love, and the inevitable little heartbreaks that occur as time passes and children grow.

Peter Shaffer’s Amadeus is a reimagining of the lives of Antonio Salieri and Wolfgang Amadeus Mozart. This provocative work weaves a confrontation between mediocrity and genius into a tale of breathtaking dramatic power. In the court of the Austrian Emperor Josef, Antonio Salieri is the established composer. Enter the greatest musical genius of all time: Wolfgang Amadeus Mozart. Salieri has given himself to God so that he might realize his sole ambition to be a great composer. Mozart is a foul-mouthed, graceless oaf who has that which is beyond Salieri’s envious grasp: Genius.

Before Rent, there was Tick, Tick… Boom!. This autobiographical musical by Jonathan Larson, the Pulitzer Prize- and Tony Award-winning composer of Rent, is the story of a composer and the sacrifices that he made to achieve his big break in theater. Containing fourteen songs, ten characters, three actors and a band, Tick, Tick… Boom! takes you on the playwright/composer’s journey that led to a Broadway blockbuster. His girlfriend wants to get married and move out of the city, his best friend is making big bucks on Madison Avenue and, yet, Jon is still waiting on tables and trying to write the great American musical. Set in 1990, this compelling story of personal discovery is presented as a rock musical filled with instantly appealing melodies and a unique blend of musical theater styles.

1939 Hollywood is abuzz. Legendary producer David O. Selznick has shut down produc-tion of his new epic, Gone with the Wind, a film adaptation of Margaret Mitchell’s novel. The screenplay, you see, just doesn’t work. So what’s an all-powerful movie mogul to do? While fending off the film’s stars, gossip columnists and his own father-in-law, Selznick sends a car for famed screenwriter Ben Hecht and pulls formidable director Victor Fleming from the set of The Wizard of Oz. Summoning both to his office, he locks the doors, closes the shades, and on a diet of bananas and peanuts, the three men labor over five days to fashion a screenplay that will become the blueprint for one of the most successful and beloved films of all time.

Written and Created by Roger Bean

Meet Denny and the Dreamers, a fledgling doo-wop singing group preparing to enter the Big Whopper Radio contest to realize their dreams of making it to the big time! Trouble comes in the form of Lois, who arrives to put some polish on the boys. Denny falls in love, Wally falls in line, Eugene falls apart, and along comes handsome heartthrob Duke to send the whole situation spinning. The ‘60s hits say it all: “Fools Fall in Love,” “Tears on my Pillow,” “Runaround Sue,” “Earth Angel,” “Stay,” “Unchained Melody,” “Lonely Teardrops,” and “The Glory of Love.” Winner of the Los Angeles Drama Critics Circle Best Musical Award, Sh-Boom! Life Could Be a Dream will leave you laughing, singing, and cheering— let’s hear it for the boys! 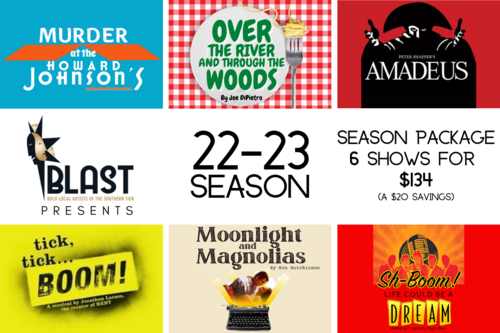