Join us for BLAST’s Spring 2022 Season at the Cider Mill Stage featuring 4 great shows for one great price.

“Over the Pub” by Tom Dudzik

The boisterous and colorful Murphys have a lot going on in their cramped apartment above the family pub in Cork City, Ireland in 1964. The youngest of the bunch, 12-year-old Tommy, is a smart, wise-cracking kid who’s starting to question family values and the Roman Catholic Church. When Tommy goes up against the ruler-wielding Sister Mary Agnes and announces that instead of being confirmed he’d rather shop around for a more “fun” religion, all hell breaks loose. A warm and hilarious look at family, growing up, and God.

Alex More has a story to tell. A struggling actor in L.A., he takes a job working in the Malibu basement of a beloved megastar. One day, the Lady Herself comes downstairs to play. It feels like real bonding in the basement, but will their relationship ever make it upstairs? BUYER & CELLAR is an outrageous comedy about the price of fame, the cost of things, and the oddest of odd jobs.

Maria Callas is teaching a master class in front of an audience: us. She’s glamorous, commanding, larger than life—and drop-dead funny. Callas’ first “victim” is Sophie, a ridiculous, overly perky soprano. Sophie chooses to sing one of the most difficult arias, the sleepwalking scene from La sonnambula—an aria that Callas made famous. Before the girl sings a note, Callas stops her—and now what has started out as a class becomes a platform for Callas. She glories in her own career, dabbles in opera dish, and flat-out seduces the audience. But with that, there are plenty of laughs going on, especially between Callas and the audience. The next two sessions repeat the same dynamic: The middle session is with a tenor, who moves Callas to tears. She again enters her memories, and we learn about Callas’ affair with Aristotle Onassis; an abortion she was forced to have; her first elderly husband whom she left; her early days as an ugly duckling; the fierce hatred of her rivals; and the unforgiving press that savaged her at first. Finally, we meet Sharon, another soprano— the young singer has talent, but Callas tells her to stick to flimsy roles. Sharon is devastated and rushes out of the hall, and Callas brings the class to a close by acknowledging the sacrifices we must make in the name of art.

Many moons ago in a far-off place, Queen Aggravain decreed no couples could marry until her son, Prince Dauntless, found a bride. Princesses came from far and wide to win the hand of the prince, but none could pass the impossible tests given to them by the Queen. That is, until the “shy” swamp princess, Winnifred the Woebegone, showed up. Would she be able to pass the Sensitivity Test, marry her prince and help Lady Larkin and Sir Harry to the altar? Carried on a wave of wonderful songs, by turns hilarious and raucous, romantic and melodic, this rollicking spin on the classic tale The Princess and the Pea provides some side-splitting shenanigans. For after all, a princess is a delicate thing. 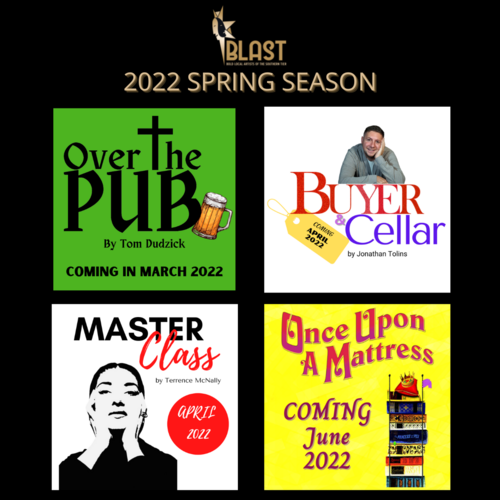